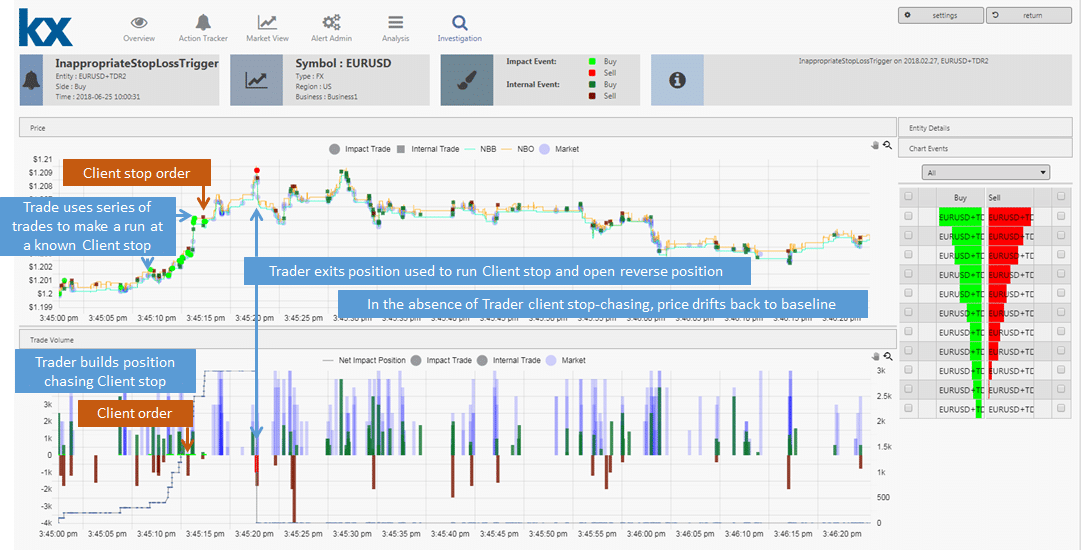 By Gemma Small and Enda Gildea

In this series, we take a look at what makes KX for Surveillance such a powerful tool for detecting market manipulation. This article discusses the Inappropriate Stop Loss Triggering alert.

“Just about to slam some stops”[1]

No, we aren’t talking about basketball, but the behavior in the markets known as “Inappropriately Triggering Stop Loss Orders” by manipulating the market.

A Stop Loss order is intended to limit the loss on an investor’s position. The order is placed with instructions to either sell or buy (if shorting) when the security reaches a certain price. It allows the investor to place an order and not have to monitor the price of the market continuously. It is used as a defence mechanism to ensure protection against larger losses. For example, the order may be placed with a stop loss percentage of 5%, ensuring that if the price to drops by 5% the order will automatically execute before the price can fall any lower.

The Inappropriate Stop Loss Triggering alert has been designed to identify those traders who have excessively pre-hedged against their client’s stop loss orders, thereby influencing the price and causing the order to trigger. The alert detects the increase of market volatility and the trader’s profiting from price reversion after the client order has been filled. As Stop Loss orders are generally set at a price worse than the market, this allows the firm to experience larger profits at the client’s expense.

Among its definition of indicators of manipulative behavior the ESMA’s technical advice includes:

“Transactions or orders to trade which have the effect of, or are likely to have the effect of increasing/decreasing/maintaining the price of a financial instrument (or the underlying financial instrument of a derivative) preceding the issue, optional redemption or expiry of a related derivative or convertible; or payout determination (e.g. in respect of client stop loss or barrier options).”

Instances of such market manipulation led to part of the largest fine imposed at that time by the FCA in 2014 of £1.1 billion. This fine was imposed on five banks for the behavior of their G10 spot FX trading operations. The FX Spot trading desks released information on client orders to traders at other firms. The traders then colluded in trading aggressively in order to influence the spot FX rate and trigger the stop loss orders. Quotes from the market participants engaging in this behavior include a trader messaging a trader in another firm saying “HIT IT… I’m out of bullets”.  One trader, when asked by a colleague whether stop loss orders were “a pain for you guys”, responded by messaging “nah love them… free money” and “we love the orders… always make money on them”. Due to the activities of this self-proclaimed “A-Team”, the FCA introduced new supervisory programmes to tackle the issues surrounding stop loss orders [1]. KX for Surveillance has designed an alert in order to monitor and highlight any such suspicious behavior.

The performance of the kdb+ database allows large volumes of data to be analysed to determine where stop loss orders have been triggered improperly. The ability to efficiently display data patterns every nanosecond ensures that any potential market manipulation occurring can be quickly and easily captured for monitoring purposes. The KX solution provides snapshots of the entire market throughout the day to highlight the trader’s activity in comparison to the market activity. This provides an easy way to assess any entity’s trading patterns against the backdrop of the market to determine if they are creating favorable market conditions to then take advantage of.

The manipulation occurs over a short period of time allowing the trader to take brief advantage of inappropriately triggering the stop loss order and benefiting from trade reversal. KX for Surveillance analyses every Stop Loss order and the conditions surrounding the lifecycle from the order being entered to after it has been filled.  The chart below displays the Client Stop Loss order being entered, the trades the entity under investigation then entered and the market trades (if available) during the time period.

The diagram displays the rise in price as the trader trades excessively after the order was entered until the price reaches the stop price and the order is triggered and filled. The entity’s trades are plotted alongside the price and the market trades booked at the same time. As the trader continuously enters trades the stop price is hit and the order is triggered. The alert will determine the profit made by the trader within this time frame and if it breaches a pre-determined value.

The alert will also generate a comparison between the price the order was filled at and trades entered after the order fill. By monitoring all market trades in this timeframe the alert is then able to determine if the price has reversed after the stop loss order has been filled. If it has reversed by a considerable amount that would then suggest that the entity was trying to manipulate the market.

The alert takes slippage into consideration before triggering. Markets can be unpredictable and even using protective methods, such as stop loss orders, does not guarantee a set price. If there is a significant downward price movement in the underlying the stop loss will then be triggered at the next available price and not the stop price. This will mean there is a difference between the price received when executed and the price the order was set at, and this gap is referred to as slippage. In order to reduce false positives the Inappropriate Stop Loss Triggering alert will assess if slippage may have been the cause rather than market manipulation.

This activity will be flagged as suspicious and will alert KX for Surveillance users if it is consistent behavior for the entity and detail previous occurrences throughout a trading day. Multiple instances of this activity can create a pattern and provide stronger evidence that the entity is manipulating the market in order to gain potential profit.