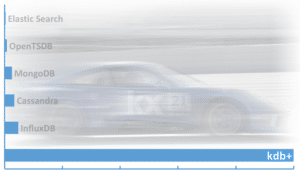 Last summer, I wrote a blog discussing my experiences running kdb+ on a Raspberry Pi, in particular making use of published benchmark content from InfluxData to generate test data, perform ingestion, and invoke a set of benchmarking queries. As a result of kdb+’s excellent performance, I concluded that it would be a perfect fit for small platform or edge computing.

I felt that I owed it to the KX community to take things a step further: to run performance tests against all of the products that InfluxData documented, including Cassandra, ElasticSearch, MongoDB, and OpenTSDB – and go beyond the Raspberry Pi and use a variety of other server configurations.

The difficulty with doing this is that I didn’t have time to install and configure these technologies (let alone on the Raspberry Pi), so I decided to take a different approach and exploit the old transitivity argument, where if a is greater than b, and if b is greater than c, then it follows that a is greater than c.

So, using this logic and taking InfluxData’s benchmark results at face value, I concluded that all I had to do was run the tests on my hardware and compare my results with theirs to get a broad comparison across all the other technologies. Moreover, as InfluxDB had pretty much outperformed all the other databases in their tests, I reckoned that if kdb+ outperformed InfluxDB, then by transitivity, kdb+ was the fastest of them all!

To read more about the data, queries and hardware environment that I used and the resulting performance figures please click here