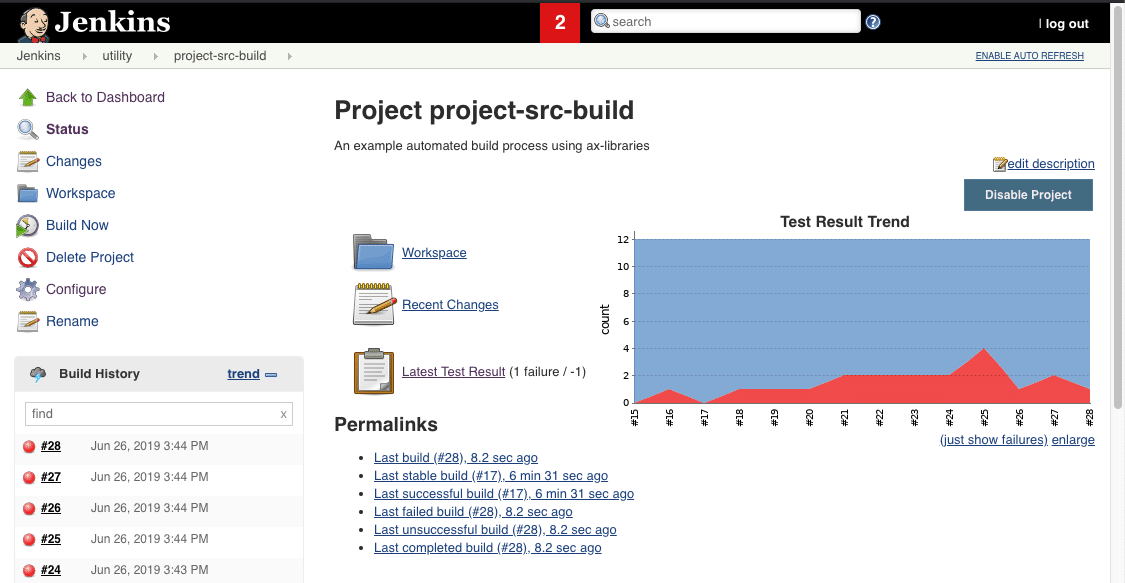 The AxLibraries package contains a number of useful libraries which can be loaded into existing q processes to provide useful development functionality outside of the Kx Analyst or Kx Developer UIs, such as from command line or from within other editors. Some of these libraries, such as the test framework qCumber, can be run as a command line script for more convenience. These scripts make it easy to integrate important code validation steps into automated build environments such as Jenkins. Note that all of the functionality included in AxLibraries is also available in the Kx Analyst and Kx Developer UIs.

At the time of writing, the AxLibraries package includes: 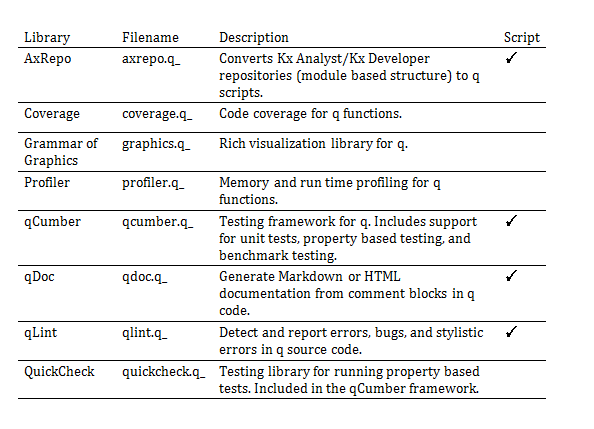 AxRepo, qCumber, qDoc and qLint can also be run directly from the command line as a script using q:

Each script has a -help flag that outputs more information on how to use that specific script. Optional flags are enclosed in [].

After unzipping the ax-libraries.zip archive, read the README.md file that it contains. This file details important information for installing and using the provided libraries. A simple installation outline is provided below, but it is recommended that you follow the specific instructions in the README.md.

First we have to copy the correct library files for the current operating system to ws/lib. In this example, run on macOS, we copy the files in ws/lib/osx to ws/lib:

Next setup the AXLIBRARIES_HOME environment variable:

Once this environment variable is set, any included library can be loaded from any directory on the system. The libraries do not need to be copied to $QHOME.

With AxLibraries, it’s easier than ever to export, lint, test, and document your q code. The following example will use a repository of q modules and q functions created in Kx Developer, and will demonstrate an example build using AxLibraries.

The example here would work just as well using a project of q files created in any editor. 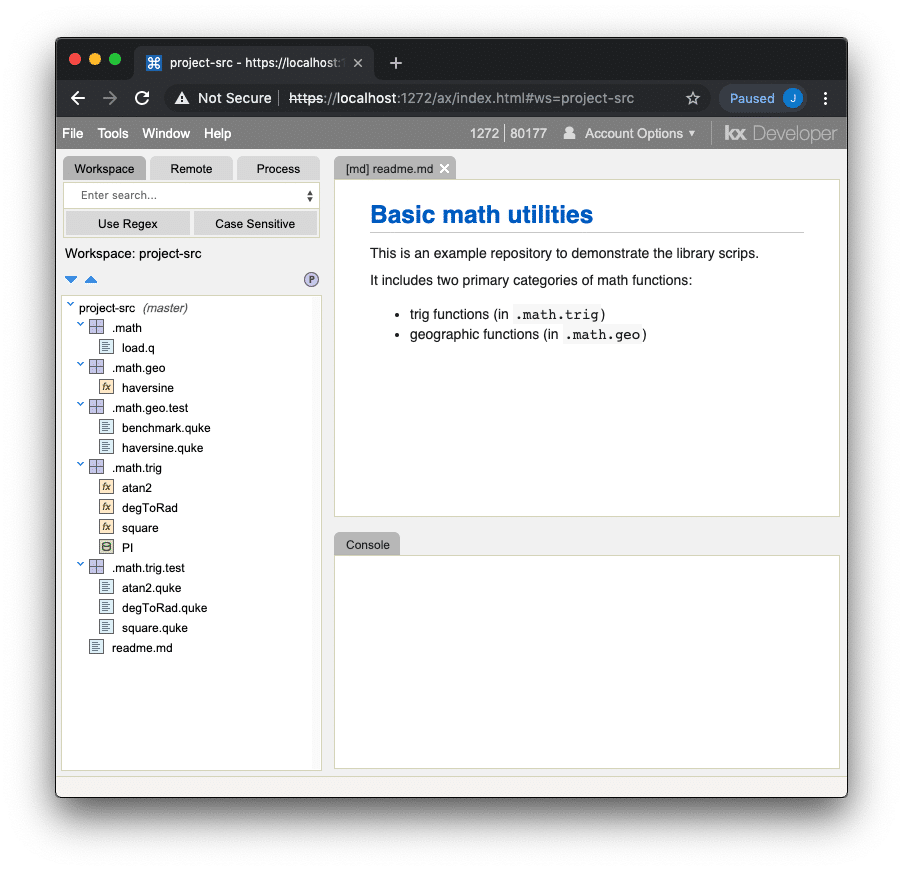 While using modules in Kx Developer or Kx Analyst provides many advantages, we must convert them to plain q scripts before proceeding. If your source code is already a collection of regular q scripts, this step is not necessary.

To convert from the custom kxscm repository format, we use the axrepo.q_ script:

This command reads the project-src repository and outputs modules as regular q scripts, placing them in the ./workspace/out/project-src directory.

Many common sources of q bugs can be identified this way, and qLint will organize issues into three categories: error, warning, and info. We can view qLint’s output directly if we do not provide the -out flag:

qCumber test files with the .quke file extension can be run by using the qcumber.q_ script:

Omitting the -out flag and adding the -color flag prints the result to the console with colors to indicate success and failure: 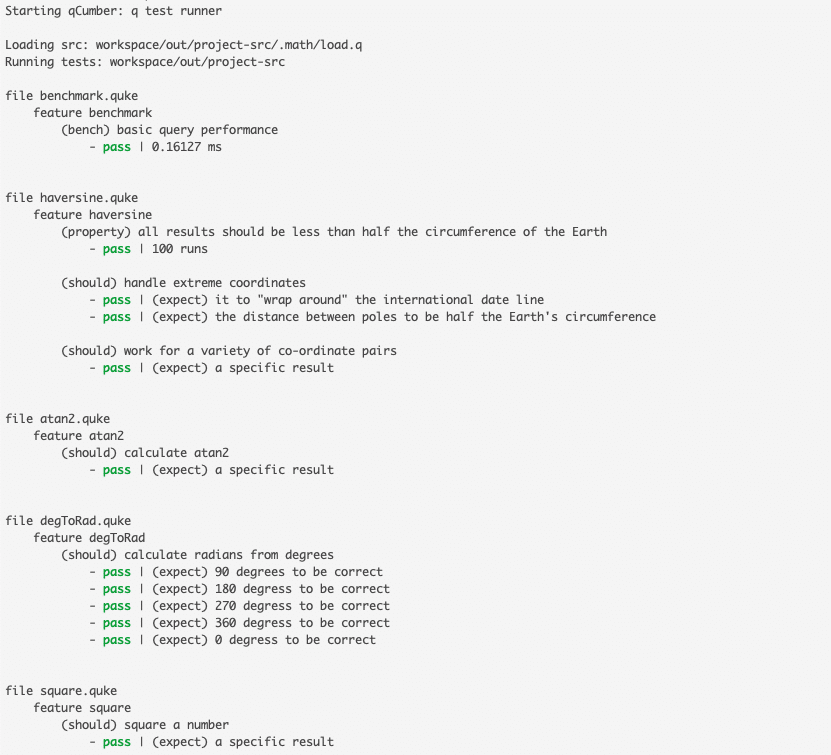 The qcumber framework, as with the other utilities, can be run as a library within a q process as well, making it possible to run tests in live development processes if needed.

Finally, documentation can be generated using qDoc and output in either Markdown or an mkdocs compatible format:

Because we passed the -render flag, the output in ./workspace/qdoc/doc will be an mkdocs ready directory. With mkdocs installed, we can build HTML with mkdocs build, or serve by doing mkdocs serve and get the following output: 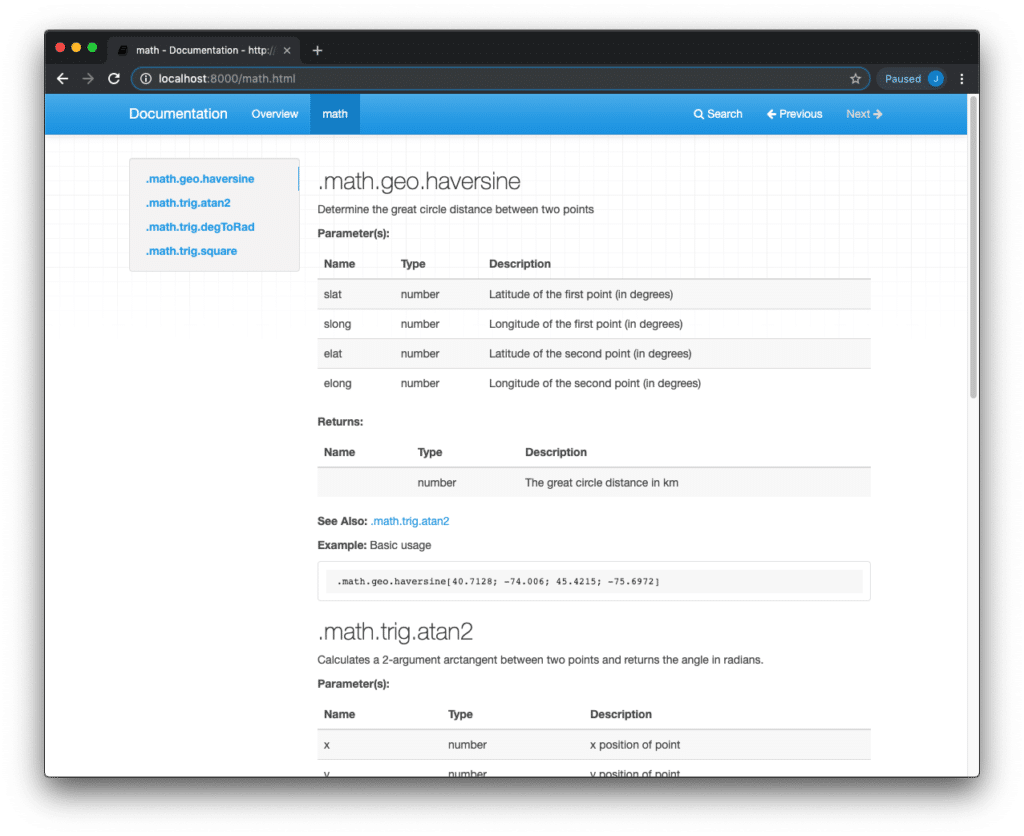 We have now exported, linted, and tested our code, and generated project documention. The workspace directory structure at this point is as follows: 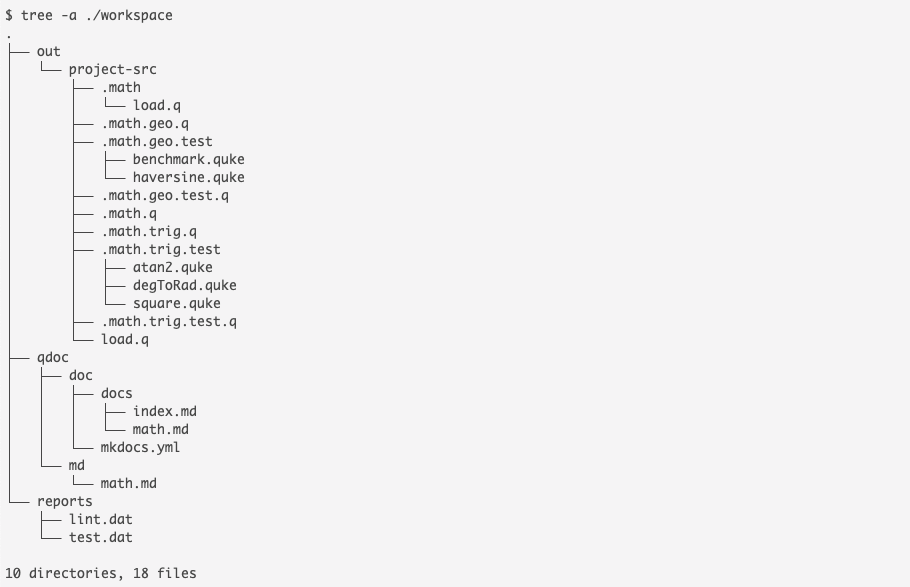 We can fully automate this process using a build system like Jenkins. The exact steps for creating a Jenkins job are outside the scope of this blog, however creating a job that follows the same steps as those outlined above is trivial.

If desired, the JUnit plugin available for Jenkins can be leveraged to visually display historical test results within Jenkins. To interface with the plugin, we can modify the qcumber.q_ command to output a JUnit XML file:

This will output a JUnit formatted .xml file instead of a q serialized .dat file. We can then have the Jenkins job publish our JUnit test results by pointing it at the test.xml file, making informative metrics about test result trends available in the Jenkins UI: 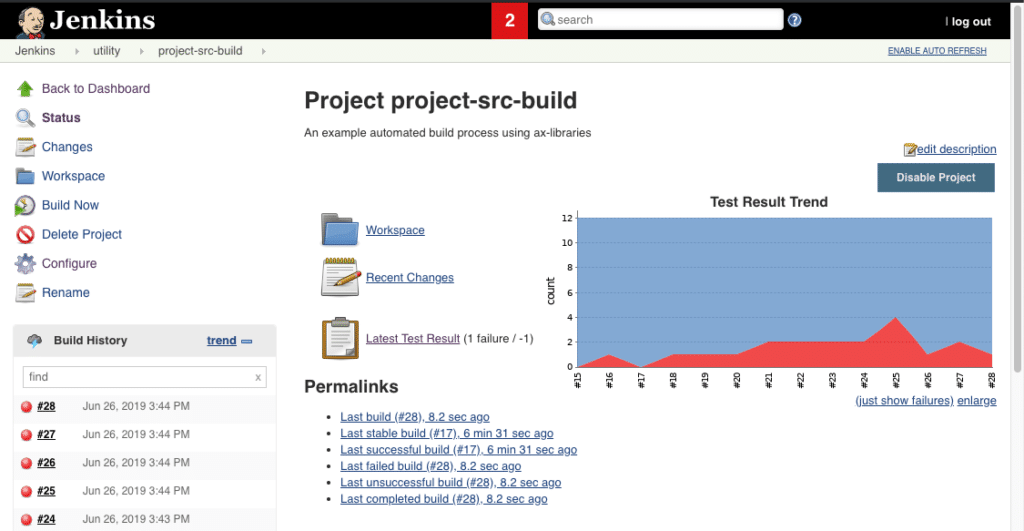