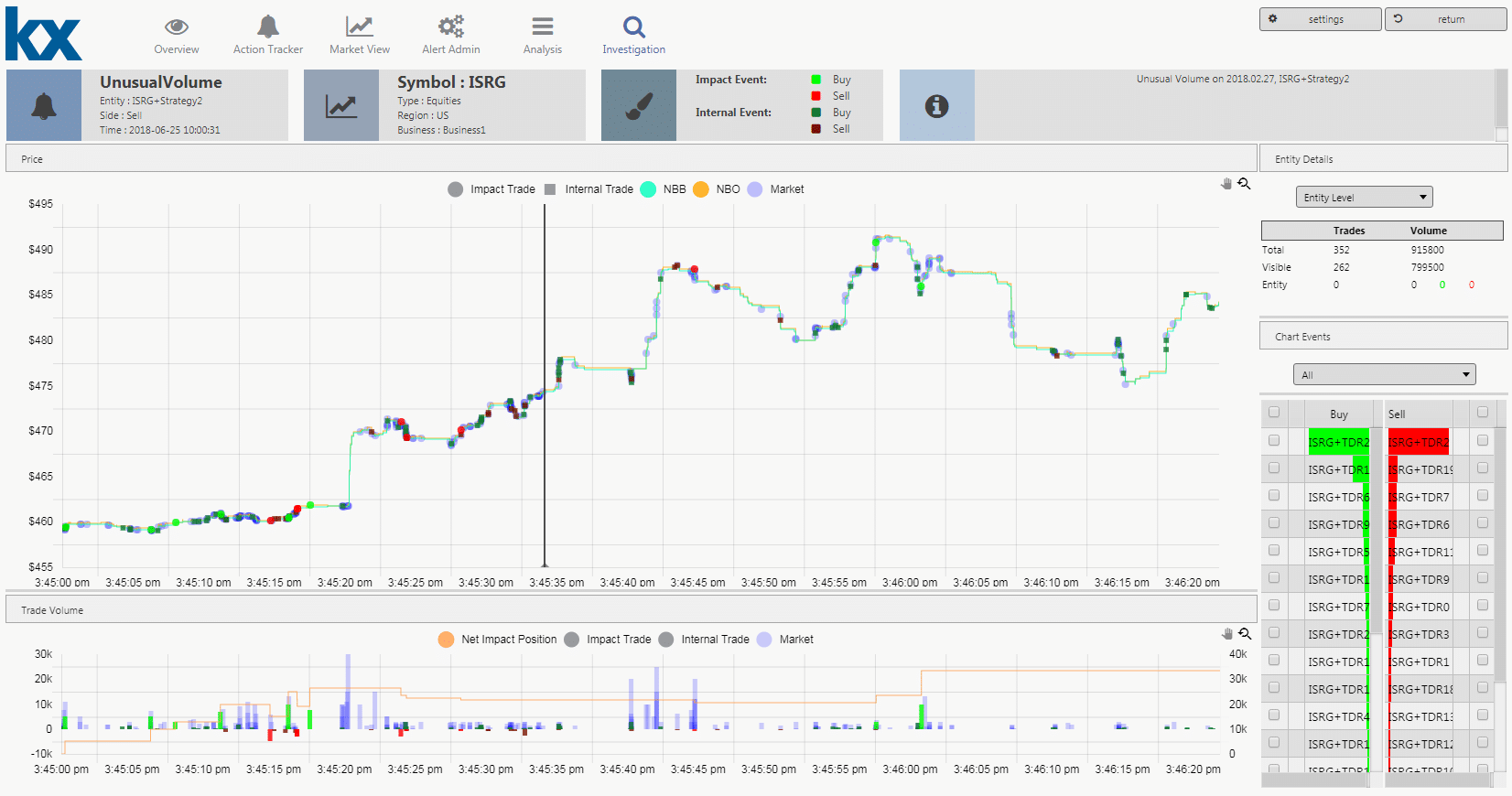 Kx has a broad list of products and solutions built on the time-series database platform kdb+ that capitalize on its high-performance capabilities when analysing very large datasets.

In this series, we take a look at what makes Kx for Surveillance such a powerful tool for detecting market manipulation. This second article in the series takes a closer look at Unusual Trade Volume.

Unusual trade volume can be described as transaction levels in a security, stock, or other instrument that exceed pre-defined thresholds or benchmarks for all other trades within a defined time period. By purposely trading at higher volumes than normal within a relatively short period of time, the trader may be attempting to manipulate the market.  This action will result in a price move outside of the normal range of volatility for an underlying security. The instigator of this strategy can then, like those attempting Momentum Ignition (as outlined in a previous blog), benefit from the resulting price movements by either closing out a pre-existing position or anticipating a price reversion.

Pursuers of this strategy undermine the integrity and fair and natural operation of the market by creating a misleading image of the market and its underlying securities. Authorities and exchanges such as SGX, SSE, and SZSE have recognized this as an area of market manipulation, and have introduced regulation to monitor such instances of volume and price movements in order to protect their markets and investors.

Kx for Surveillance provides corresponding functionality to monitor and analyze trade and market data to detect and issue alerts when unusual trade volumes are identified. The alert can then be analyzed as illustrated in the Kx investigation screen below. 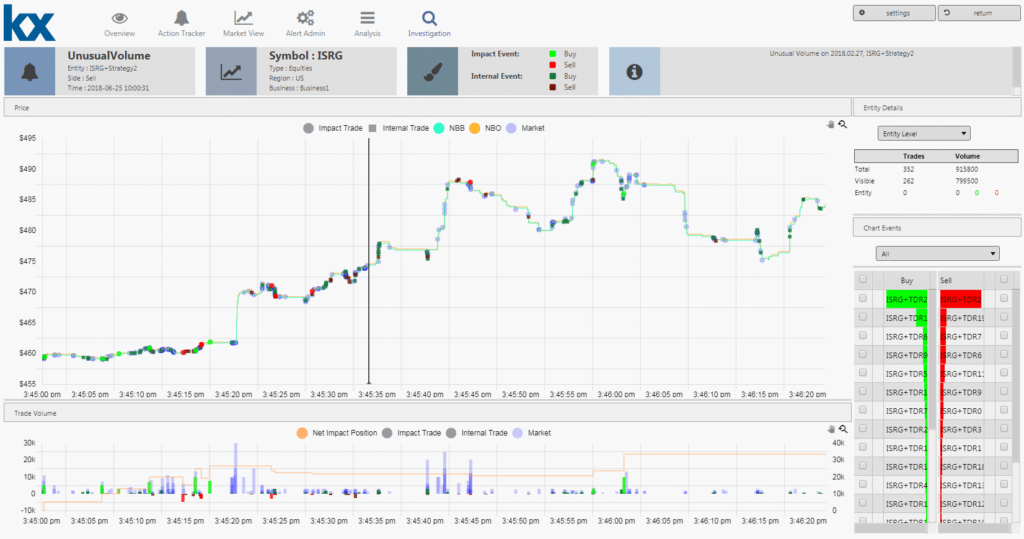 The objective of the investigation is to identify where transaction volumes occur outside of the normal trading pattern. For example, in this investigation screen above we can identify large peaks in volume traded on the buy side around 3.45.25 pm, and between 3.45.40-45 pm. If this level of volume breached the threshold for that security at that time, an alert would have been triggered.

It is also important to pay attention to the trade price as there will normally be a correlation between volume and price, and a separate alert can be formed for each. From the price axis above, we can also note that the price was rising throughout the day. To conclude on whether this is a true alert, we need to investigate whether the peaks in volume and price at that time are suspicious or not. In order to do so, we must take into consideration various factors to identify whether there is any potential for market abuse on the trader’s behalf. These considerations include the following;

Using the considerations above, a determination will ultimately be made on whether the unusual order in comparison to the market threshold is active or reactive with regards to market movement. If a legitimate supporting argument can be made for why the trade volume breached the threshold, the alert can be closed as a false positive. However, if no supporting argument can be made the alert will be classified as a true alert and escalated accordingly.

As mentioned above, benchmarking is essential for the analysis and determination of unusual trade volumes. Unusual trade volumes are identified by analysing and comparing the number of trades calculated for each trader trading on a specific instrument, and the average daily trade volume, i.e. the market benchmark/threshold.  Kx for Surveillance, underpinned by the kdb+ database, facilitates granular analysis of every individual event in real time in order to calculate the benchmark data.

Kx for Surveillance offers a simple user-interface which enables authorized users to configure time windows for investigation and set defined thresholds.  Thresholds for high volume entities can be benchmarked on historical volumes in order to correlate them to ever-changing market conditions and reduce false positives. The thresholds will vary, and can be refined, throughout the day depending on any news events relating to economic or political agenda of countries where the products are domiciled.