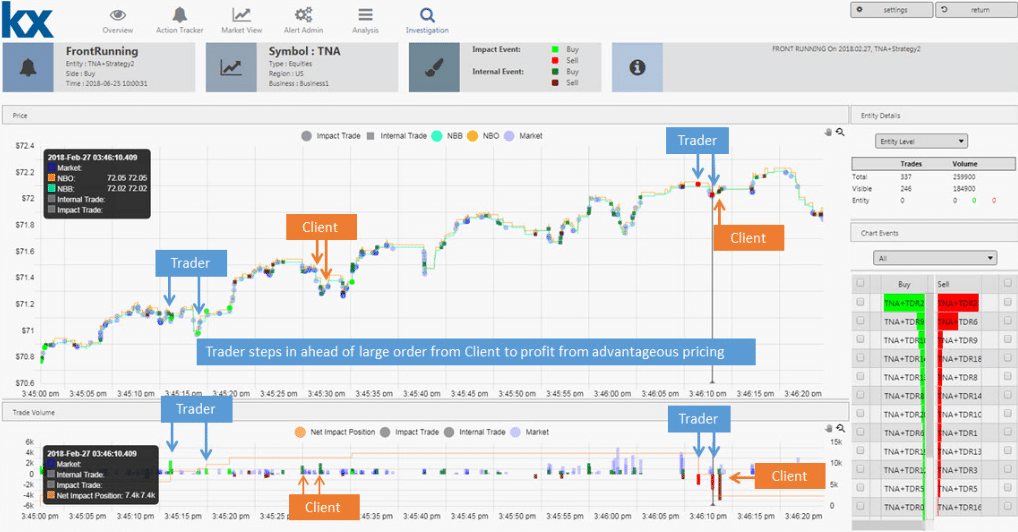 By Ricky Chang and David Crossey

In this series, we take a look at what makes Kx for Surveillance such a powerful tool for detecting market manipulation. This article discusses Front Running Alerts.

Front Running is an illegal trading practice under most jurisdictions and regulatory regimes. Under article 8 of the Market Abuse Regulation it is defined as follows:

“front running/pre-positioning – that is, a transaction for a person’s own benefit, on the basis of and ahead of an order (including an order relating to a bid) which he is to carry out with or for another (in respect of which information concerning the order is inside information), which takes advantage of the anticipated impact of the order on the market or auction clearing price”[1]

The definition of inside information is very broad; non-exhaustive examples include stock price-sensitive news announcements or mergers & acquisitions in equities markets or  central bank announcements and economic reports for FX, Interest Rate Derivatives. Front running can occur in almost any asset class and product, such as shares, bonds, certificates of deposit, spot, forwards, swaps, options.

On November 13 2017, the New York State Department of Financial Services (DFS), announced that Credit Suisse AG had agreed to pay a fine of USD$135 million for front running of client orders, and other unlawful conduct which disadvantaged customers.

“The DFS investigation also found that front-running – trading ahead of known client orders – was encouraged by executives of eFX, Credit Suisse’s electronic trading platform.  From at least April 2010 to June 2013, Credit Suisse employed an algorithm designed to front-run clients’ limit and stop-loss orders.  Credit Suisse programmers designed the algorithm to predict the probability that a client’s limit or stop-loss order would be triggered.   Credit Suisse traders would apparently enter the market with that information, knowing that the market might move in a specific direction if the stop-loss or limit order was triggered.  From April 2010 through June 2013, Credit Suisse executed approximately 31,000 limit orders and 41,000 stop-loss orders that may have been a source of profit through front running.  Additionally, because front-running can occur on orders that ultimately remain unfilled, Credit Suisse may have profited as well from front running many tens of thousands of additional client orders.”[2]

The Front Running solution provided in Kx for Surveillance applies scenario alert rules to transactional data to identify entities (similar to the MAR definition of persons) which enter firm orders ahead of client orders, and other subsequent business logic rules to confirm that a front running scenario has occurred.

The Kx for Surveillance dashboard below displays a trade price chart for NYSE Arca – Direxion Daily Small Cap Bull 3X ETF (TNA) on the 27th February 2018 between 3:45:00 pm and 3:46:20 pm, detailing that a Front Running scenario has been detected.

The solution has identified Client and Trader (non-client) trades in the transactional data.

When an entity front runs a client order, the final outcome is subject to the prevailing market conditions. Regardless of outcome however, the intention is the same, which is to take advantage of the knowledge of the client’s order pricing and positioning, which is a clear breach of market regulations. This leads to four distinct scenarios that prevail in both rising and falling markets:

We provide illustrations of two of these scenarios below:

The market then continued in the same direction, which gave the entity an opportunity to fill the client order when the market price reached the client’s price, thus realizing a trading profit directly as a result of filling the client order.

Instead of reverting, had the market reverted in the opposite direction, the entity would appear to have sold into a falling market. Scenario #2 would have occurred, and although the entity did not realize any apparent benefit, it is still a valid Front Running scenario. 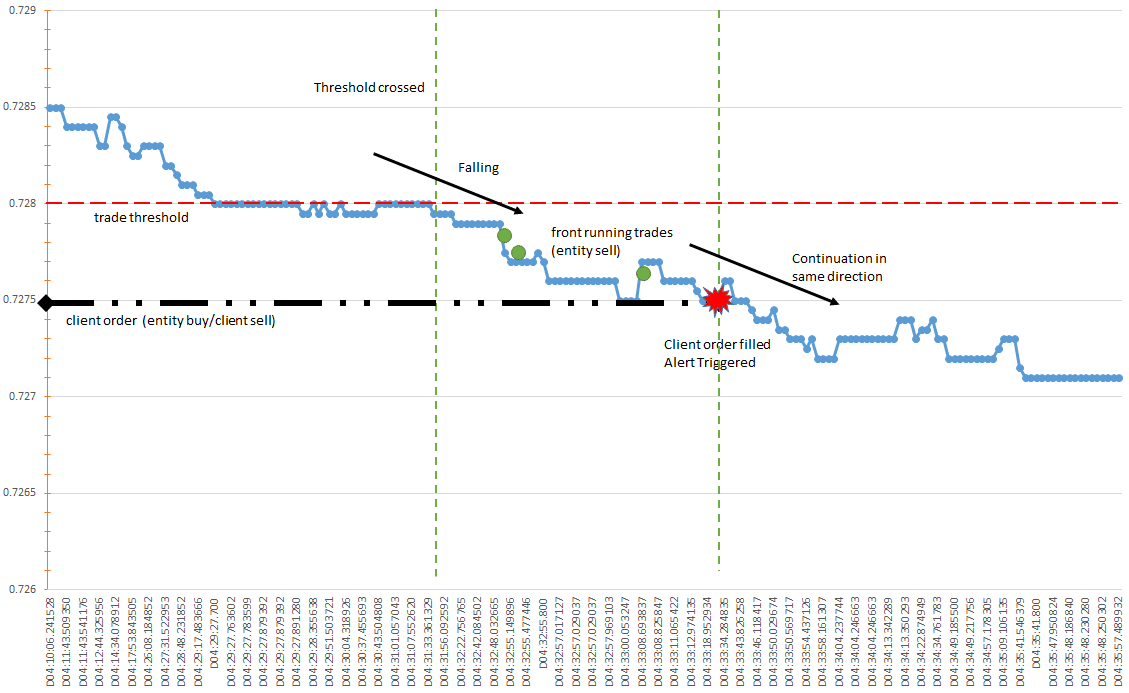 The market then reverted in the opposite direction, which gave the entity an opportunity to buy back into the market at a lower price, thus realizing a potential trading profit. 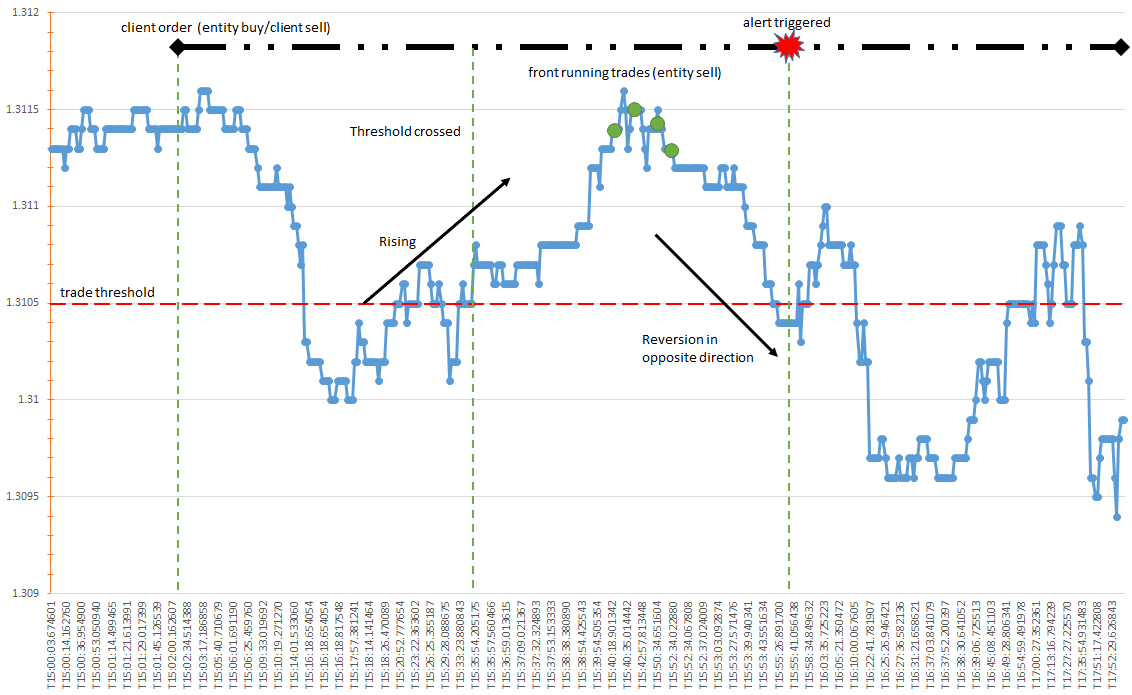 The Kx for Surveillance solution enables detection and investigation of Front Running scenarios in both real-time and historical data. It can simultaneously capture all relevant orders, trades and market data (trades), and process the newly captured data for potential Front Running scenarios. If critical data dependencies have not been satisfied, processing can be deferred or rescheduled until they are.

Kx Dashboards enables users to gain high level overview of top suspects, to detailed investigation of individual alerts with visualization tools (graphs, line/volumes charts) that interleave all transactional data to recreate a view of the market.

The Front Running scenarios described in this post can be further customized by: