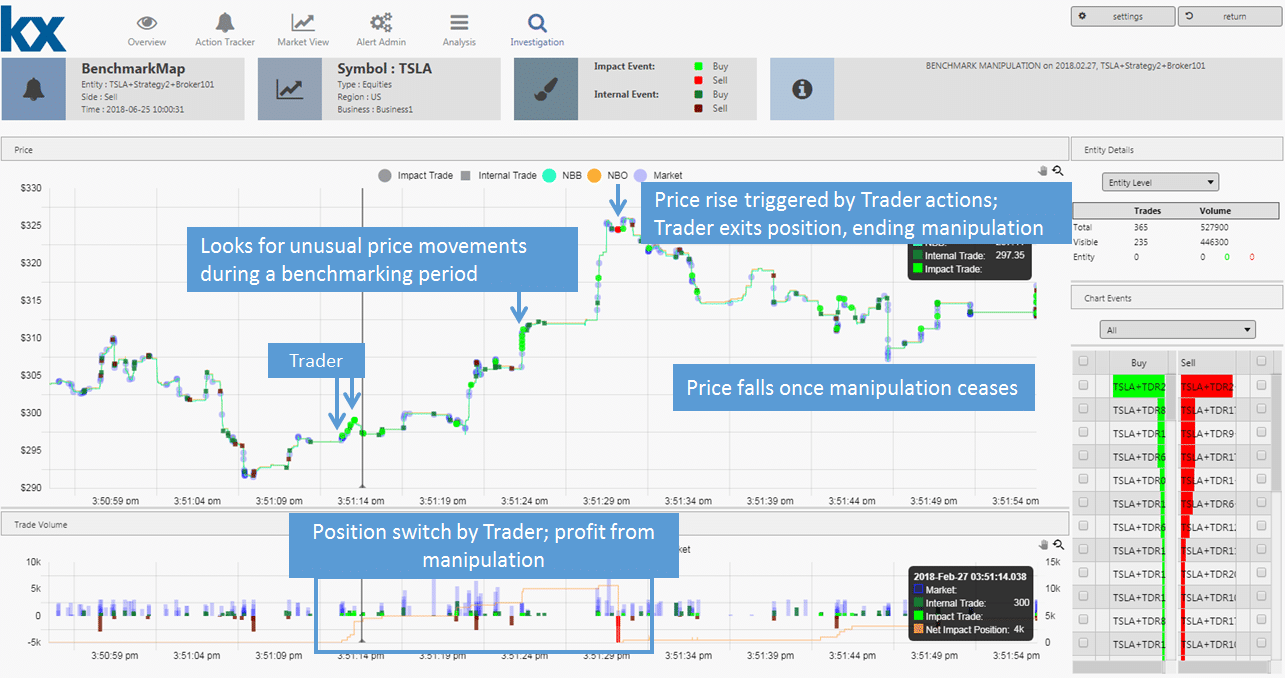 by Aaron Robinson and Conor King

Accurate and reliable benchmarks are critical to the smooth (and fair) running of the global financial system. They are utilized in the pricing of a plethora of financial products, contracts and services, including funds, interest rates and mortgages. Therefore any entity with the means to manipulate a benchmark not only stands to profit greatly from such an activity, but may undermine the efficiency and integrity of the market itself.

Based on this definition, some of the highest profile examples of Market Abuse in recent history have been occurrences of Benchmark Manipulation. Indeed, the Financial Conduct Authority (FCA) even keeps a ‘leaderboard’ of the biggest fines imposed for manipulation of benchmarks across the UK financial sector [3] and other third-parties track similar fines on a global scale[4]. Notable examples include the LIBOR rate fixing scandal and the manipulation of benchmark FX rates.

The London Interbank Offered Rate (LIBOR) is an average interest rate calculated based on submissions by several major international banks of what their estimated short term borrowing costs would be. It is one of the most important interest rate benchmarks globally with the prices of hundreds of trillions of dollars worth of derivatives, corporate bonds and other financial products relying on it. In 2008, reports emerged that major banks were colluding to manipulate the LIBOR rate. The manipulation of this rate allowed traders to profit from trades based on LIBOR based securities and allowed banks to appear much healthier than they were during the global financial crisis.

The WM/Reuters 4pm Closing Spot Rate, or the ‘4pm Fix’, is the ‘most important benchmark in the foreign exchange (FX) market’. In 2013/4 it was revealed that extensive, decade long collusion had been occurring between currency traders at major banks with the aim of manipulating FX benchmarks including the 4pm Fix. Using online chat rooms to organize their activities, the currency traders placed coordinated trades during the fixing period to influence the rate at which the benchmark rate was calculated. By influencing the benchmark rate, traders and their respective banks were able to profit by triggering client stop loss orders and by increasing the benchmark price of currencies they were selling.[5]

These may be two of the better known examples of Benchmark Manipulation, but due to their ubiquity and importance within the financial system, all benchmarks are vulnerable to varying degrees of manipulation. With the practice being so prevalent, and the fines imposed by regulators who detect it so punitive, it is no wonder that banks and institutions worldwide are becoming ever more proactive in their efforts to combat this type of market manipulation. [6]

Kx for Surveillance provides a comprehensive solution for identifying and alerting instances of Benchmark Manipulation with investigation tools for analyzing them in further detail. Essentially, the Benchmark Manipulation alert aims to detect scenarios where a particular entity holding a position in an instrument causes a change in the price of that instrument during the period when the benchmark in question is being calculated. To further validate the alert, extra conditions must be met for each scenario. For example, the entity must also have exited their position when the benchmark calculation period finished (and caused another price movement) and/or the entity must have potentially stood to profit from the price change during the benchmark calculation period (either by having orders on the book that rely on the benchmark price, or having their position become profitable based on an internally calculated benchmark price).

Once a scenario matching this behavior has been identified, various other standard business logic rules must also be satisfied, most of which involve the breaching of user defined values. These include rules that should filter out any low value trades that may contribute to false positives. Only when all rules have been satisfied will the system consider the behavior under analysis an instance of Benchmark Manipulation.

An example of the Benchmark Manipulation Investigation dashboard is shown below: 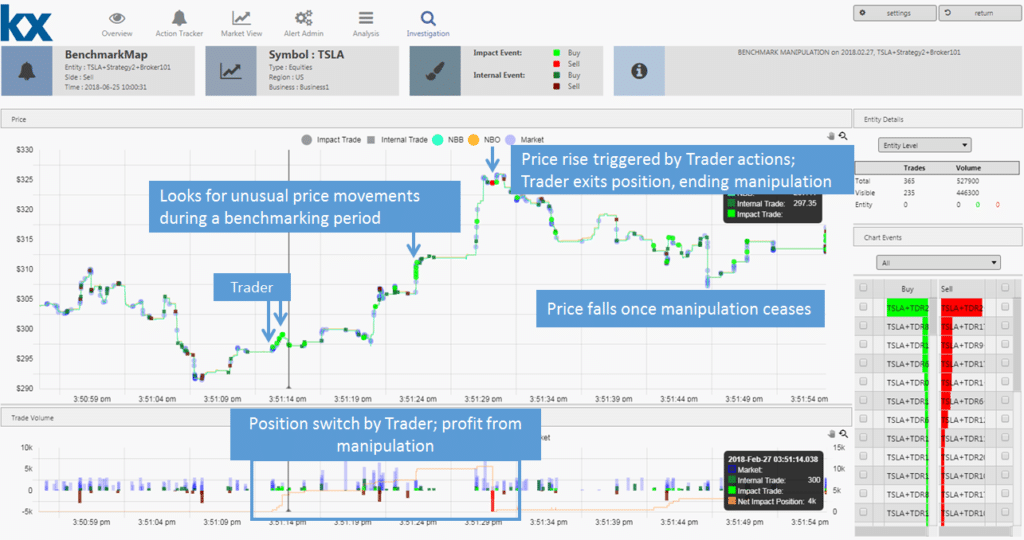 The chart in this dashboard shows the market price, market trades and trader (entity) trades for sample stock during the benchmarking time period under investigation. Trades by the entity in question are clearly shown as is the rise in price that these trades caused. Following the price rise, the position switch (or reversal) by the trader is best viewed using the volume chart below the main price chart. Post-reversal, the main price chart clearly tracks the fall in price caused by the trader exiting their position. Through this dashboard, and others within the Kx Dashboards suite, users can quickly and accurately investigate behavior they have deemed unacceptable and can confidently make the decision to pursue the investigation further if necessary.

The benchmark calculation periods, or time windows, are configurable for each type of benchmark; individual benchmark time windows can be configured per exchange, asset class, product and instrument. The targeted ‘entity’ is also configurable and can consist of any relevant identifier from the data (for example trader, account or counterparty). These configurations can be changed by the user at any time, as can almost every aspect of the alert logic, e.g. degree of price movement required in the benchmark calculation period. The high level of customization available allows the user to tailor the alert to their own requirements and backtesting functionality provides an independent workflow to calibrate different configurations for greater accuracy and efficiency.

Enormous fines and criminal prosecutions by regulators worldwide have shown financial institutions (and individuals) that they cannot afford to be inactive in combating the manipulation of benchmarks, particularly now that institutions are expected to identify and investigate this behavior as a result of its explicit prohibition in regulation such as MAR.

With Kx for Surveillance, the second-to-none performance of the kdb+ database combined with the versatility and convenience of Kx dashboards provides institutions with a comprehensive, robust and flexible solution for identifying and investigating occurrences of benchmark manipulation.