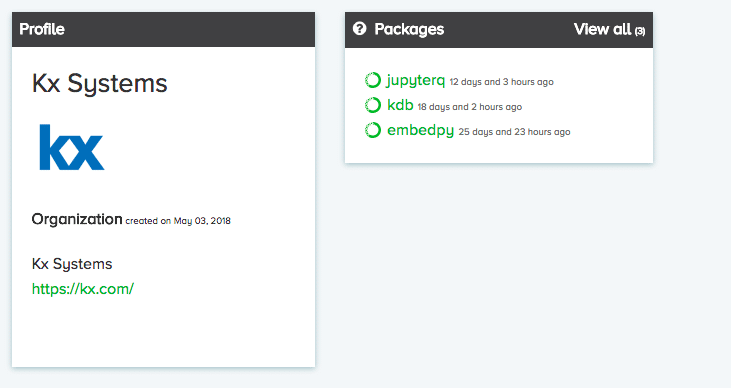 Kdb+ on Anaconda and Google Cloud

At Kx25, the international kdb+ user conference held in New York City on May 18th, we made a number of announcements about new ways to access kdb+ and interconnect with it. (You can watch my presentation, called “Snakes on a Plane” on the Kx YouTube channel.)

A significant announcement for Python and kdb+ users was the addition of kdb+ to the Anaconda Python distribution platform. Anaconda has become the de facto platform for Python developers, and by extension data scientists and machine learning engineers.

There are three packages that you will be able to install: kdb, embedpy and jupyterq. Check out the Kx packages at https://anaconda.org/kx. At present, it is available for Linux and OSX. Windows support will be added in time. It will install the non-commercial personal edition of kdb+ on demand (the kdb package) — which requires an open internet connection. The second package you can install is embedpy, the kdb+/Python library, which forms the base of our machine learning initiative. The final package you can install is jupyterq, the Jupyter kernel for kdb+. The way the dependency tree works, if you install jupyterq it will automatically install the embedpy package and the kdb package.

Keep checking back to Anaconda for further kdb+ developments. We will be adding more of our existing libraries as well as new machine learning libraries as and when they become available.

Going forward, we will be doing further work with containerization and Kubernetes in the context of GCP. We have successfully tested Kubernetes deployments of kdb+ with several customers on Google Kubernetes Engine (GKE). We will also be adding our machine learning libraries to the platform for ease of deployment into your ML ecosystem to use popular platforms like TensorFlow, native to GCP.

More information and documentation for the kdb+ Google Cloud Launcher and the Anaconda distribution is available on code.kx.com.