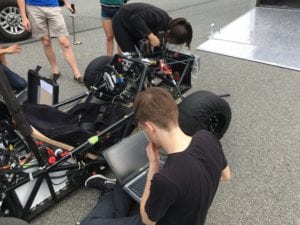 By Nuria Jimenez and Abby Gruen

The Formula SAE electric car international competition is run by SAE (formerly the Society of Automotive Engineers) to test engineering students’ ability to design and develop a small prototype Formula One-style car. The competition takes place over a few days, and includes autocross racing, with each team driving their own car. The cars are scored based on a number of criteria and tests including a design event; a cost and manufacturing analysis event, an acceleration event, a skidpad event, an autocross event; a fuel economy event, an endurance event and a presentation event.

The 33 members of the university team competed against 26 clubs from top universities from around the US, Canada, South Korea and Brazil. The university motorsports team for over a decade, and the team this year achieved the best results yet.

During the race, measurements from both an IMU and GPS sensor suite provided accurate location and acceleration data. Other sensor data collected information about power draw, lateral acceleration, brake temperature, brake pressure, axis accelerometer, wheel speed and air temperature. The team used kdb+ for tracking and analyzing the streaming data coming from all of the on-board sensors recording each value in real time and visualizing the performance using Kx Dashboards. Their goals for 2018 included making accurate lap time predictions and doing virtual tuning, allowing them to get the exact stiffness, weight and desired power requirements for optimal performance.

After a day of racing on the circuit in Lincoln, the team learned that their performance qualifications were excellent. They got pole position in acceleration and autocross (making them the fastest EV in the competition), and jumped to second place in skidpad. The outstanding team effort, together with the technologies in place to test performance, including kdb+ and Kx Dashboards, allowed their car to cross the finish line two minutes ahead of the rest of the teams. Overall, they placed fourth due to a technical question that was decided against the team, but most importantly, they left Lincoln with the car to beat! 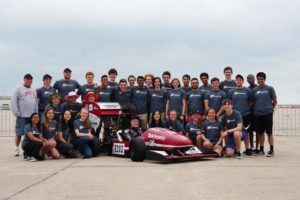